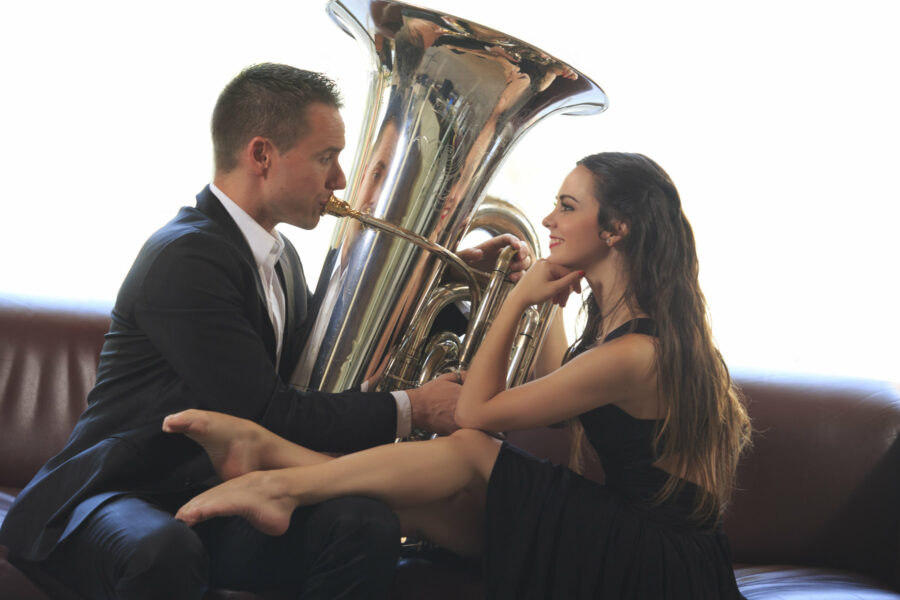 Duo2Arts! brings the unimaginable to reality through its performances.

The project was born in 2019 as a wish of a couple to bring their passions together. On the one hand, Sherezade Soriano, ballerina trained in classical and contemporary dance plus theater arts, and on the other hand, Jose Martínez, tuba player.

THE FIRST FEW MONTHS OF EXISTENCE

The duo also travelled to Toulouse, France, in order to be coached and inspired by actor Cédric Chapuis and actress Margot Mouth (http://www.scenesplurielles.fr).

“It was fabulous. It was great, with a beautiful sub-plot. At the night of the performance, when it was over, the audience exploded. They went nuts.”

Together with the Spanish pianist extraordinaire David Jiménez, Duo2Arts! completed a tour of Spain (Villa del Prado, Chelva and Navalcarnero) and the USA (Seattle, Chicago, San Francisco and Boston) in 2019. They presented the brand-new show “Adulthood Stories”, a tale told without the use of words via music, dance and theater.

CURRENT ACTIVITY AND ON TO THE FUTURE

Most recently, the group participated at the 6th edition of the #GESTO Street Dance Festival in Torrelodones (Spain).

Upcoming performances include those at the 2021 Ear Taxi Festival in Chicago (USA).

“What a truly amazing performance and touching storyline. It was our great honor to have Duo 2Arts! and pianist David Jimenez here in Boston”.

“Beautiful performance. Only the masterful tuba playing by Jose, the sensational dancing of Sherezade, and David’s perfectly matched piano artistry could come together so grippingly. It was an honor to be there”.

“The combination of all three of you onstage was magic”.

“This TUBA and DANCE recital gave a unique view into the synergy of sound and motion in an incredible display of sonic and visual phrasing at its highest level […] I saw a performance with this ensemble in Portugal this past summer [of 2019]. It is absolutely unforgettable. This absolutely must be seen to be believed”.

“Wonderful performance and world class playing. I loved everything. The project is growing and growing. Fantastic. […] The most important we have already achieved: it creates EMOTIONS in everyone who sees and listens to the performance. Just beautiful”.

“My soul is uplifted. Your performance still has a powerful impact on me. It must be seen again and again. Powerful love story with a happy ending”.

“I had the pleasure of hosting this show in Seattle. This show is fantastic. Jose and Sherezade have created a wonderful story though music and dance. The tuba/piano playing is reason enough to go, but then Sherezade takes it to another level. Go see this!”.

Duo2Arts! brings the unimaginable to reality through their performances. Keep an eye open for future performances!

Not a fan of the Duo2Arts! yet?