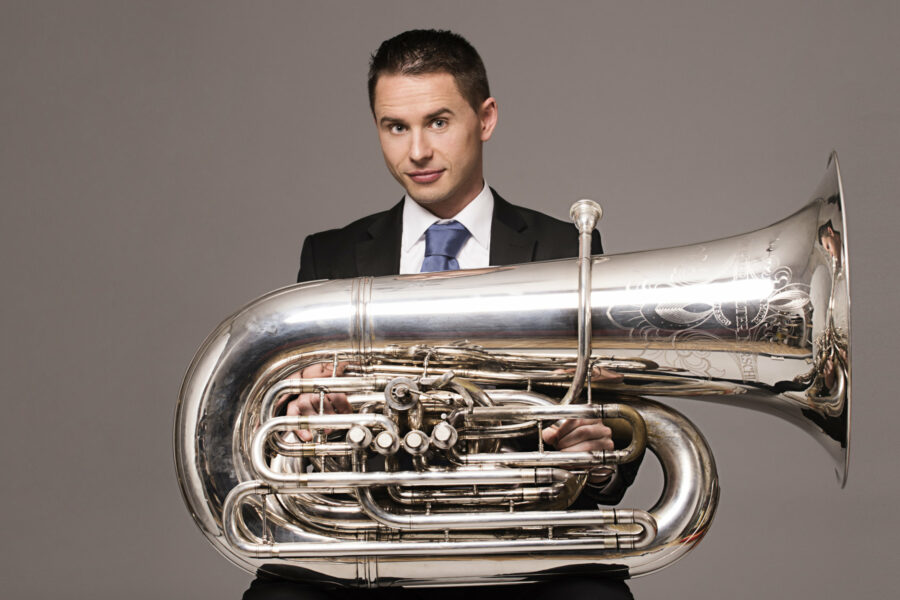 A native of Chelva (Spain), Jose Martinez is principal tuba of the National Orchestra of Spain, co-artistic director of FAN, Festival of Arts and Nature, and cofounder of Duo2Arts!

Jose Martínez has been a member of the Chelva Symphony Wind Band since 1998.

Having studied in Spain, Sweden and the USA, Jose admires his wife’s drive as CEO of Espacio Sherezade, Dance and Pilates Academy, located in the mountainous northern region of Madrid, where they live being loved by Danza (a female Shepherd Mastiff Mix doggie) and Mopa (a female Belier bunny).

You might want to know more about Jose and his adventures, hence keep reading…

After having performed as guest principal tuba with the National Orchestra of Spain in several occasions in 2015 and due to a successful audition in January 2017, Jose Martínez joined the ranks of the orchestra in April 2017.

The orchestra makes its home at the National Auditorium of Music in Madrid where it therefore performs the majority of its concerts. Besides, the orchestra occasionally presents concerts all around Spain and abroad, with recent tours through Europe and in the near future to South Korea, Japan or South America.

Jose became a regular member of the Civic Orchestra of Chicago for the 2016/2017 season after having been an associate member of the orchestra since 2011.

Because of life circumstances, Martinez had to refuse some fantastic opportunities to play with the following orchestra academies:

Due to life circumstances, Martinez had to refuse some amazing opportunities to play with the following ensembles:

Subsequently, these and some other opportunities are bringing Jose all around the world. For instance, performances with the world-renowned Mahler Chamber Orchestra brought him on tour through Asia, Europe and Oceania during the 2018/2019 season.

Jose is always looking for opportunities to play alongside colleagues because he finds chamber music fundamental in the routine of a musician. For that reason, he is a member of the following groups:

*Duo2Arts! (since June 2019)
A music, dance and theater company cofounded with the ballerina and actress Sherezade Soriano.

*Duo Basso Continuo (since April 2019)
A tuba and piano duo cofounded with the pianist David Jimenez.

*SylvaDúo (since August 2020)
A tuba and percussion duo cofounded with the percussionist Francisco Amado.

He has performed with ensembles such as World Brass (2018) and as a Zarin Mehta fellow with musicians from the New York Philharmonic and the American Brass Quintet (2016).

Besides, he has appeared with artists from the Chicago Symphony and the Ensemble Dal Niente in the MusicNOW contemporary music series (2016).

Caused by life decisions, Martinez had to refuse some wonderful opportunities to play with the following groups:

A finalist at the Music Academy of the West and the Boston University Concerto Competitions (2015 and 2014 respectively), he also was a featured soloist at the Midwest Clinic International Conference with the Civic Orchestra of Chicago (2015).

Martínez will be associate tuba professor at Mediterranean Music College (https://mmcvalencia.com) from the academic year 2023/2024. The tuba professors will be:

For more information about the studio, please, check the MMC Tuba Studio.

From December 2020 till September 2022, Jose was temporary tuba professor at the Higher School of Music of the Basque Country (https://musikene.eus).

Sergio Carolino dixit and one of his inspirations, Jose will forever be indebted to Mike Roylance, Gene Pokorny, Morten Agerup as well as Sergio Finca, his greatest influences. In fact, he is wordless to describe his gratitude to these individuals.

In spite of the many teachers Jose studied with during his official formative years in Spain, they were fundamental. For instance, Juan Toledo, José Giner, Lorenzo Llovet, Jose Vicente Navarro, Hernández Guirado, Juan Jesús Ortiz, Miguel Fabra as well as José Miñana.

His desire to study abroad brought him to Sweden where he continued his development at the University of Gothenburg from 2010 till 2012 with a Master of Musical Arts in Orchestral Performance (and Chamber Music Studies).

Crediting a great deal of progress to intensive summer studies at several other USA Institutions, Jose also attended the Tanglewood Music Center, Music Academy of the West or the University of Redlands.

Most recently, during the world-wide pandemic of 2020, Doctor Martinez completed a 10-weeks online course on The Science of Well-Being at Yale University.

A Luminarts Cultural Foundation Fellow at the Union League Club of Chicago since 2016 until 2026, Jose received numerous awards that supported his career and avoided extraordinary expenses in the bosom of the family.

Indeed, the 2014-2016 “CaixaBank” Foundation Fellowship (Fulbright-equivalent) stands out. In a few words, Jose was the first brass player ever awarded with this grant since the creation of the Foundation in 1982.

Similarly, his studies abroad were supported by:

If you are interested in getting to know Jose Martínez’s teaching philosophy, please, check the following article.

You might be willing to know Jose Martínez as a passionate, caring educator, if that is the case, take a look at the following text.

Otherwise, are you up for an inspiring story involving a world-renowned orchestra and Jose Martínez? Click here then!